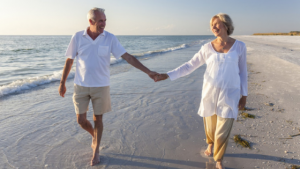 Cancer prevention is an important aspect of our daily lives. For men, the most prevalent cancer diagnosed is prostate cancer. Finding ways to prevent or reduce one’s risk of developing prostate cancer is a high priority.

The evidence is mounting that inflammation and oxidation play key roles in the development of prostate cancer. Research suggests that regular exercise may be one of the best natural antioxidants.

Exercise causes many changes in the body that help reduce circulating levels of reactive oxygen inflammation. A recent study in the Journal of Clinical Oncology evaluated the effects of exercise in prostate cancer patients. Men with at least 3 hours per week of vigorous activity had 49% reduced overall mortality and 61% reduced prostate cancer mortality compared. This was compared to men with less than 1 hour per week of vigorous activity.

A 2004 study from the NIH initially suggested frequent sexual activity might reduce the incidence of prostate cancer.

This was further supported by a recent review of 32,000 men in the Health Professionals Follow-up Study who were followed for 18 years. Prostate cancer risk was 20% lower in men with more frequent sexual activity. According to the study lead author, Jennifer Rider, “Safe sexual activity could be good for prostate health.”

Proscar and Avodart are prescriptions that are used to “shrink” the prostate by lowering the number of male sex hormones. The drugs block the enzyme that changes testosterone into dihydrotestosterone(DHT), a much more potent hormone.

Higher than normal levels of DHT may also play a part in developing prostate cancer.

There has been tremendous interest in the effects cholesterol-reducing medications have on the development of prostate cancer. There have been at least 18 trials to date, several of which have found a reduced risk of cancer recurrence after both surgery and radiation therapy. This suggests that statins may slow the progression of prostate cancer.

Research is ongoing to determine if statins may actually reduce the incidence of prostate cancer.

Metformin is a prescription medication used primarily to manage diabetes. It is also known to have a protective effect on the progression of prostate cancer. A recent study of nearly 4,000 diabetic men found that those taking metformin, when diagnosed with prostate cancer, were less likely to die from cancer or other causes compared to men using other diabetes drugs.

Prior research focused on whether metformin might reduce the risk of developing prostate cancer has been negative. More studies are currently underway.

There has been extensive research looking at the relative effect of aspirin on the incidence of prostate cancer. While many of the studies demonstrated a protective effect, others did not. The jury is still out on aspirin.

Regardless of one’s diet or lifestyle, knowledge is one of the best ways to reduce prostate cancer risk. By staying informed on the latest research regarding prostate cancer prevention, men can make small changes that can lead to big improvements. Start today by signing up for The EDGE Blueprint Consult, a genetic-based report and private consultation that will give you the insight you need to achieve your maximum potential!