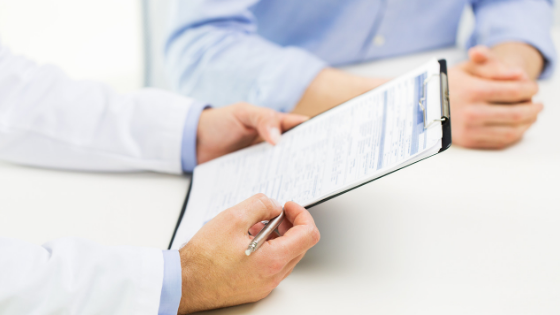 Approximately 70% of men with BPH (enlarged prostate) have co-existing erectile dysfunction (ED), according to research presented in The World Journal Of Men’s Health. But that doesn’t necessarily mean that ED causes BPH or that BPH causes ED. It also doesn’t mean that if you have one problem, you must have the other as well. This statistic simply means there’s some sort of connection between the two. But what is the relationship? And what does this link mean for your wellness?

If you’re suffering from BPH and/or ED, you’re likely wondering how this will influence your sexual and urinary health. Wonder no more—the answers are here!

(Well, not all the answers. Still waiting on more research and science for some explanations. But a lot of the answers!)

What is erectile dysfunction?

Erectile dysfunction (ED) is when a man can’t get or keep an erection. ED affects nearly 52% of all men at some point in their lives. It can stem from psychological concerns like: anxiety, depression, stress, poor sleep, relationship concerns, or lowered confidence. It also has physical causes like: vascular problems (high blood pressure or poor blood flow), imbalanced hormones, lowered nitric oxide, damage to pelvic area, clogged arteries, and diabetes.

Basically, your brain, blood vessels, hormones, nerves, psyche, and muscles all need to work together to create an erection. If one part of the process isn’t functioning properly, an erection simply won’t happen.

But none of these have to do with the prostate. The prostate isn’t part of the erection process  (it’s part of the sperm-making process)… so why are BPH (enlarged prostate) and erectile dysfunction linked?

The prostate is the walnut-shaped gland at the base of the bladder that surrounds the urethra. Its primary function is the production of fluid for the semen. Benign Prostatic Hyperplasia (BPH) is the noncancerous growth of cells in the prostate, creating an enlarged prostate gland. 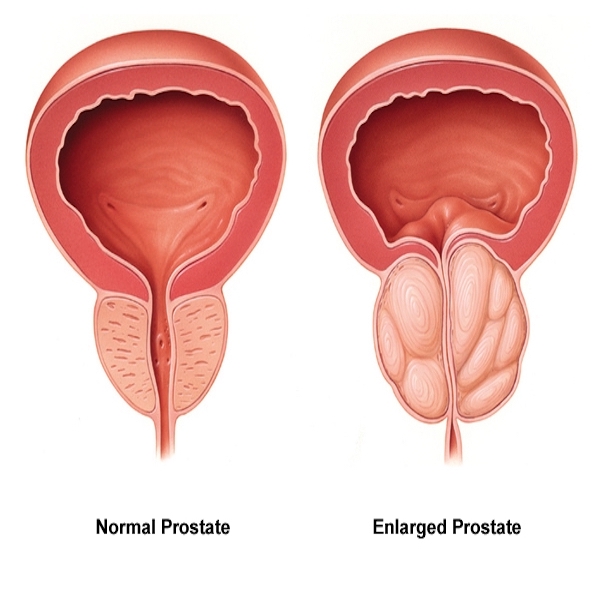 Although the prostate function is sexual in nature, the enlargement of the prostate actually upsets the urinary tract due to the proximity to the urethra and bladder. When the prostate enlarges with a benign tumor, it tends to block off the urethra—aka the tube from which you urinate and ejaculate.

This is the first link between BPH and sexual dysfunction. Even though BPH primarily influences the urinary tract, this is the same tract that semen comes out of. This indicates there is also some sort of concern with sexual health and ejaculation as well. But read on for a deeper understanding of this connection…

What are the symptoms of BPH?

The symptoms of BPH tend to be urinary in nature. If you are struggling going “number one” in the bathroom, you may want to get checked for BPH. You’ll often see BPH referred to as LUTS, which stands for “lower urinary tract symptoms.”

It’s interesting to note that there may be a correlation between the severity of BPH symptoms and the risk of other sexual dysfunctions. For example, men with severe trouble going to the bathroom often also find they have reduced sex drive, inability to keep an erection, and lowered sexual satisfaction. One review found that most men who sought treatment for either BPH or ED were actually diagnosed with both conditions. 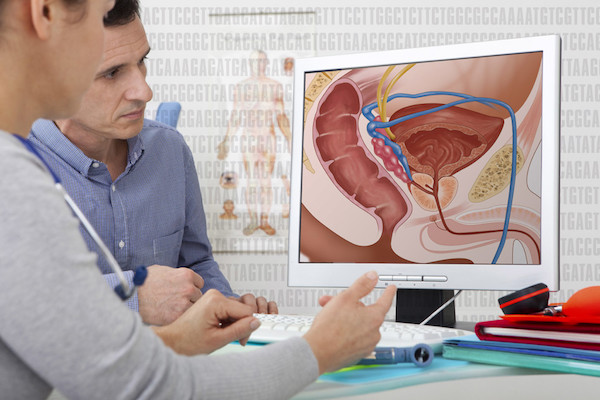 BPH is a common concern for a number of men. In fact, autopsy studies around the world have found prevalence among all men regardless of race or location. The one link is age: 10% of men in their 30s, 20% in their 40s, 50-60% in their 60s, and 80-90% over age 70. The cause of BPH is poorly understood. Because of its prevalence worldwide, it’s concluded that the major cause of BPH is simply age. However, some research has suggested that genetics, insomnia, anxiety, heart disease, and diabetes also play a role in prostate enlargement.

The “causes” of BPH are also causes of ED. This is where the second link comes in. Age, anxiety, heart disease, high blood pressure, diabetes, and poor sleep are all proven causes of erectile dysfunction—as they are with prostate enlargement. In this way, the two may not be interdependent—but their root causes are the same.

What are the treatments for BPH?

Typical treatments for BPH include hormone blockers and surgeries. This is where the third link, and possibly the most potent connection, plays a role. The treatments for BPH are proven to impact and potentially cause erectile dysfunction.

Common medications that are often prescribed for the treatment of BPH are alpha blockers and 5-alpha-reductase inhibitors. Alpha blockers, such as Flomax, relax the urine channel that runs through the middle of the prostate to ease urination. The 5-alpha reductase inhibitors, such as Proscar and Avodart, influence your endocrine system (hormones) to slowly promote shrinkage of the prostate.

Although 5-alpha reductase inhibitors may improve symptoms BPH and reduce the likelihood of problems related to BPH, they have some potential serious side effects. A study in the Journal of Sexual Medicine found that the most common side effect for 5-alpha reductase inhibitors was erectile dysfunction. They attributed this to a decrease in nitric oxide activity; nitric oxide is necessary for the blood flow to the penis that happens during an erection. 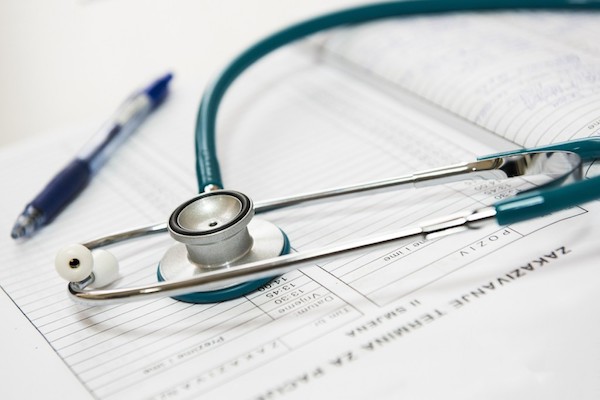 Researchers at George Washington University found that finasteride (Proscar) caused a number of sexual side effects including ED, changes in genital sensation, and quality of ejaculate. These side effects could even persist for up to 14 months after discontinuation of use. Proscar has been linked to ED in 3.7% of men who use it, and 3.3% of men report a diminished libido.

One of the most common surgeries for BPH is TURP (transurethral resection of the prostate). The incidence of erectile dysfunction post-TURP surgery is approximately 14%, as reported in the World Journal of Urology.

Overall, it’s widely accepted that surgery on or around the pelvis/prostate can cause erectile dysfunction.

Research has shown that less invasive surgeries for BPH may have reduced risk of ED. For example, TUNA (transurethral needle ablation) has been shown to less likely to cause sexual dysfunction. TUIP (transurethral incision of the prostate) and TUMT (transurethral microwave thermotherapy) also have lower incidence of ED. Nevertheless, any prostate surgery has the chance to potentially cause ED.

What is the link between BPH and ED? 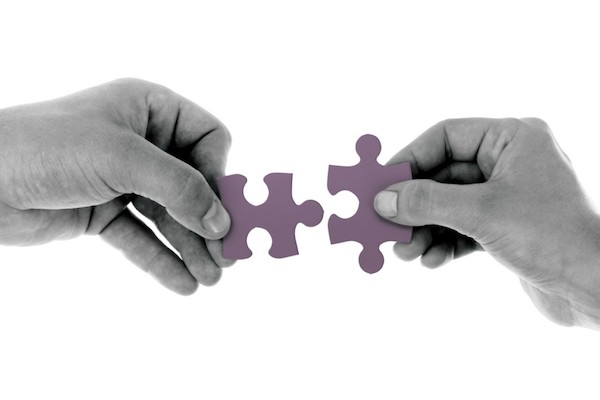 So what does all this mean? Let’s recap.

But they do often appear simultaneously. The Survey of the Aging Male found that 60% of men who had urinary symptoms also presented ED symptoms.

There are three major links between these two independent concerns:

So what can you do about this? How can you overcome your symptoms of BPH and ED easily, quickly, safely, and effectively?

Do ED medications work for BPH?

Some research has shown—though not definitively—that ED meds may also help BPH. It seems against logic, since ED meds tend to affect the vascular system and BPH is not a vascular problem. Despite logic, ED meds might work for BPH.

For example, tadalfil (Cialis), when taken daily, has been shown to improve erectile function, ejaculatory function, and sexual satisfaction in men showing both BPH and ED. Another study found that ED and BPH symptoms share common pathophysiological pathways that can be treated by tadalafil. This is likely because tadalfil increases cGMP, which is the chemical that both enhances blood flow to the penis and relaxes the muscles in the prostate and bladder. Nevertheless, tadalfil is not an approved treatment for BPH.

However, despite the research, there is still hesitancy to start prescribing tadalfil for all men with ED and BPH. ED pills don’t get to the root of the problem, instead just masking the symptoms indefinitely. This means you will be on pills the rest of your life in order to stay healthy. Moreover, medications often host a number of mild and serious side effects that aren’t worth the trouble, including blood pressure and heart concerns.

This means taking a look at your risk factors and making lifestyle changes accordingly. Common causes of BPH and ED that you should consider with your doctor include:

If you’re dealing with BPH and ED, you might feel overwhelmed running to the bathroom and unable to enjoy the sexual pleasures of life. And lifestyle changes take time. Below are a few tips to reduce your suffering in the meantime, while you attack the root causes of your ED and BPH problems.

Enlarged prostate and erectile dysfunction are linked, often presenting signs at the same time. If you’re suffering from urinary and sexual symptoms, it’s time to talk to your doctor. Be sure to discuss how your treatment for BPH will influence your ED and vice versa.

Take power over your health and vitality right now by checking out The EDGE Blueprint Consult. With this genetic-based report and private consultation, your sexual and overall health will be completely renewed and revolutionized. Get Your Blueprint now and Get Your EDGE Back!